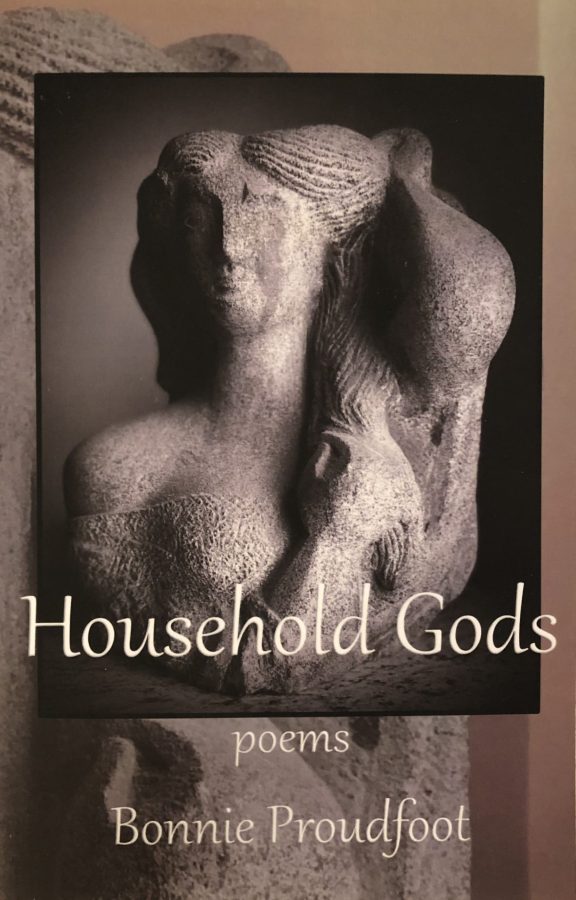 Bonnie Proudfoot’s new chapbook Household Gods weaves its way through the intricacies of what it means to be family, and also to be the one left to look back and try to make sense of it all. The past is never as far away as we’d sometimes like it to be. Fathers, mothers, aunts, brothers, and grandmothers haunt the pages, eager to tell their part in the story. Proudfoot shares the details with an unflinching eye.

One thread that stood out was the one about sports and girls. An eager girl wanting to show her father she could match him in paddleball, the girl bewildered by the change in her body that makes sports difficult, and males uninterested in her fastball, just her breasts. As the poet looks back to her childhood, the unvarnished awkwardness of youth is exposed. The difficulty of being female in a man’s world was brought home by the poem “Changeling” where you put on your game face, squinted down from the bleachers, decided surrender was the only way to win.

On the flip side, motherhood is explored, and in “Blues for Apartment 5G”, A mother’s pain is a song a house sings. In the title poem, “Household Gods” the image of the dead grandmother made me think of a female pharaoh ready for the afterlife.

Two weeks after my grandmother died, I dreamt

she lay under my dining room table, arms crossed

over her heart, eyes open, dark and shining. She did

The grandmother’s grave goods were not gold and jewels, but cups and plates, a bladed chopper in a maple bowl—the tools to care for a family. Women threaded throughout Household Gods often don’t speak, don’t protest. They endure and know their strengths; they don’t give up or give in. They find power in family, whether it appreciates them or not.

The father boats through the book on his personal River Styx, his excuses like horses at the gate, waiting for the bell. Even the brother is not immune, my brother’s body isn’t his own, Dad’s uninvited ghost barges back, not a hint of regret. Nobody escapes the legacy of family. All we can do is try and make sense of it. In “For Christopher Robin”, We had pockets stuffed with secrets. Bonnie Proudfoot’s Household Gods offers up secrets with a deft hand. A book to leave you contemplating the family mysteries that shaped you.

Daphne and her Discontents by Jane Rosenberg LaForge