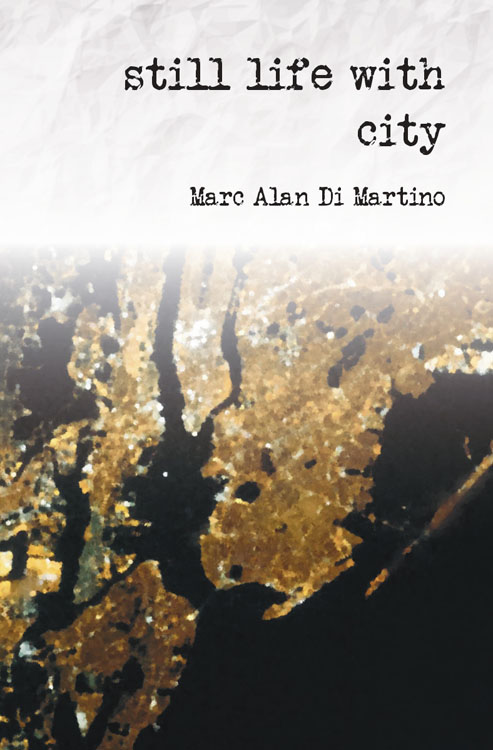 GR: Marc Alan Di Martino , thanks for agreeing to let us interview you for Gyroscope Review. We’re happy you’re one of our contributing poets. Will you please begin by telling us where you are from, what you write, and why poetry?

MDM: I’m originally from Maryland, though I spent my twenties in New York City, which is where I got into poetry both as a reader and a writer. I’ve lived in Italy for almost twenty years, first in Rome and now in Perugia. Consequently, most of my mature writing has taken place here.

I have different modes, though I write a good deal of sonnets, short lyric poems and longer narrative verse. I’ve written a satirical novel in Byronic sestets. I’ve written one-liners. I’ll point out that I don’t write much ‘free verse’, nor do I identify as a formalist. You might say I’m somewhere between the two, or off to the side.

Why poetry? In short, because prose can’t do what poetry can. It enables a concentration of vision which is unparalleled in other types of writing. Paul Valery once said – I’m paraphrasing – that poetry takes the most common thing, words, and uses them in extraordinary ways. Poetry is also cheap and portable. Painting and music, other early interests, were prohibitive in that sense. So, poetry stuck in the end.

GR: Who, or what, are your poetical influences?

MDM: I had the great fortune to work at the Gotham Book Mart, which for those who don’t know was New York’s oldest and best used bookshop. (It closed in 2006.) It had a legendary poetry section – among other legendary assets – and that’s where I came across Hart Crane, who I’d say was the first poet to really take the top of my head off, as they say. That opened the floodgates to everything from Whitman and Dickinson to the New York School poets, then over to Europe and the Italian crepuscolari, Pessoa, Cavafy, the poets of the Greek Anthology, the Romans like Catullus and Lucretius. I translate from Italian, and have spent a great deal of time with the romanesco poets like Giuseppe Gioachino Belli and Mario dell’Arco, whom no one reading this has probably ever heard of, but who is fantastic. I read everything, and influence flows from all of it.

GR: How do you decide what ‘form’ a poem should take?

MDM: I rarely sit down to write a sonnet or a villanelle, and usually whatever I do the poem ends up changing shape, mutating as it finds its subject. I listen closely to the music in the first line or lines, which generally pop into my head when I’m doing something like cooking or ironing a shirt. I’ll usually tinker with it until it feels right – sometimes for days, sometimes for years. I look for balance, tone, weight…all those things my art professors talked about in school that sounded high-minded, but now make perfect sense.

MDM: I usually try to get something done every day in the morning when I have an hour or two. I’ll do some revision, or look at my notebook to see what I’ve scribbled lately. I still keep handwritten notebooks, by the way. Sometimes it’s just adjusting punctuation, other times something clicks, and I end up in that creative zone where I feel like Keats. Until I reread it and it’s back to square one. I suppose my process is one of accretion. I try to get out of the way as much as I can and let things just happen.

GR: Do you belong to any writer’s groups – face-to-face or online? If so, are they part of your process?

MDM: For most of my writing life I never belonged to any groups or did any workshops, but for a couple of years now I’ve been part of a writers group on Whatsapp. We found each other via various online poetry journals and Twitter. We share our writing news and support each other’s work, but other than that I still write in a relative vacuum. Everything, in my view, is part of the process.

GR: What do you look for in the poetry you like to read? Any favorite poets?

MDM: I look for the same things as in my own poetry: balance, tone, word choice. Mot juste, as they say in French. I tend not to get excited by trends, and when I see lots of poets doing the same thing I try to avoid it. I read a lot, but I don’t really like talking about favorites among the living. I try not to be swayed by name recognition if that’s at all possible these days. I prefer to just think about the poetry.

GR: What is the most important role for poets today?

MDM: Just to write the best poems they can, which is work enough. I’m not crazy about celebrity poets, as you can probably tell, nor do I think the current paradigm of incessant self-promotion is a healthy one. But these are the times we live in.

GR: Which poets have you had the opportunity to hear read? Alternatively, what is the most recent book you’ve read?

MDM: I was lucky enough to see Stanley Kunitz read at 95 when I lived in New York City. I was also a friend of the poet Samuel Menashe, whom I saw read on many occasions. He would just walk up to people and recite his poems. More recently, I’ve had the great good fortune of doing readings with Moira Egan, Francesca Bell, Dora Malech, and others in Rome. The pandemic brought all that to a standstill. I’m optimistic we’ll get back to that before long, though, barring another World War. The most recent book I’ve read is Robinson Crusoe.

GR: Any future plans for your work that you’d like to talk about?

MDM: Well, I have a new book out called Still Life with City, which was released with Pski’s Porch in January. I’d love to organize a reading or two this summer. A lot of American poets come through Rome, thankfully, but it all depends on pandemic restrictions at this point. As far as work goes, I’m always most excited about the poem taking shape in my notebook. Everything else is ancillary to solving that puzzle, though I do have a few more book projects in the works.

GR: What other interests do you have beyond literature?

MDM: I got back into skateboarding in my forties, and have been doing that regularly for the last seven years or so. I just bought a guitar, too, which is another thing I loved when I was in my twenties. Music is one of the themes of Still Life with City. I have no lack of interests, just lack of time!

GR: Thank you for sharing your thoughts with us!