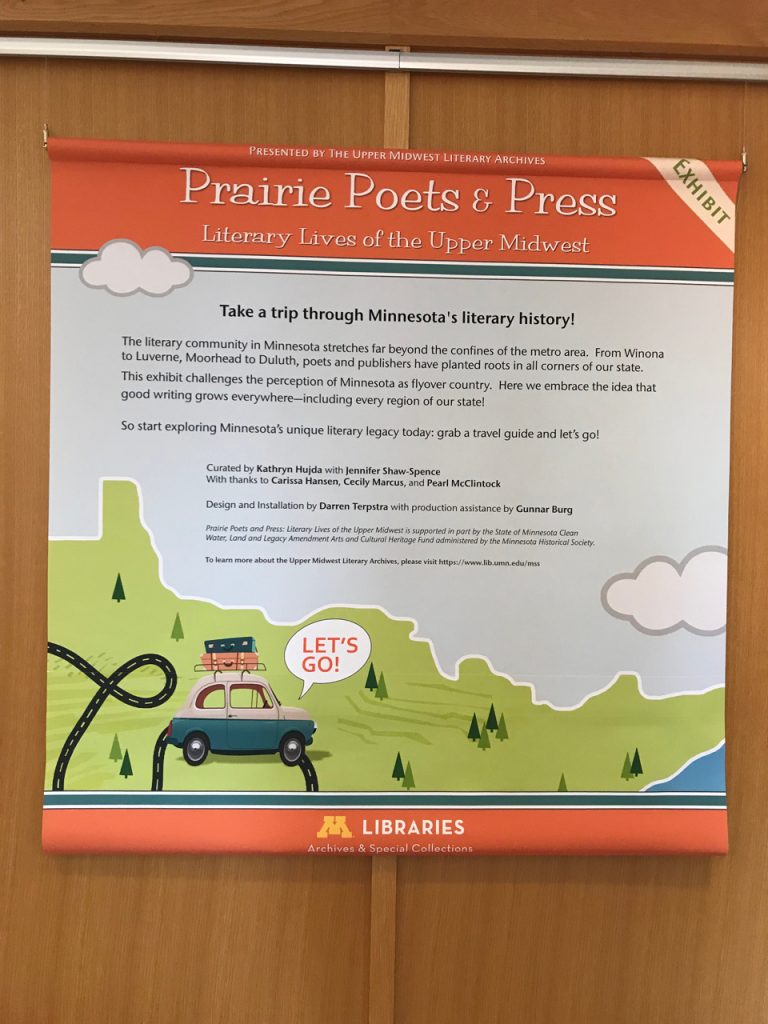 CELEBRATING MIDWEST LITERATURE, REMINDING MYSELF WHAT IT IS TO BE A WRITER

I don’t know if you know this, but Gyroscope Review’s three editors live nowhere near an ocean. Constance Brewer and I, the two founding editors, are firmly planted in what some consider fly-over country: Wyoming and Minnesota, respectively. Our Assistant Editor, Josh Colwell, lives near Pennsylvania’s border with Ohio.

I’ve been thinking a bit about this lately, and about the way literature from New York or Los Angeles might be embraced more quickly than that from elsewhere. I’m firmly planted in the heart of the Midwest, but let me tell you – literary tradition in Minnesota is strong. Its roots are deep. Most people know Bob Dylan and Prince came from Minnesota, but there are so many poets and writers who lived and still live here to celebrate: Robert Bly, Patricia Hampl, Phoebe Hanson, Bill Holmes, Louis Jenkins, Deborah Keenan, Freya Manfred, James Moore, Jim Northrup, Joyce Sutphen, Connie Wanek, James Wright, and more. We have Coffee House Press, Graywolf Press, Milkweed Editions, and Holy Cow! Press among other small presses. The literary tradition here is varied and rich.

And I recently reminded myself just how rich by visiting the Prairie Poets & Press exhibit at the University of Minnesota’s Elmer L. Anderson Library. My own road trip to the prairie this summer put me in awe of its inspiration, its space, its quiet that is perfect for the writer or the artist who wants solitude in which to work. I wanted to know more about the writers who sought ideas from that landscape and remembered that the exhibit at the U of M was still open. Off I went.

The Prairie Poets & Press exhibit covers more than just the prairie. It divides Minnesota into five regions: Superior North, Northern Prairie, Out West, River Valley, and Twin Cities. Examples of poets’ work from each area is offered, along with snippets of personal correspondence, marked-up copy, publication covers, newspaper articles, and photos. Robert Bly loomed large in the Out West section, shown with his old farmhouse and offering marked up bits of his work, covers from his little literary magazine that started in the late 1950s and lasted into the 1970s. Bly gave a reading a in 2015 at Plymouth Congregational Church in Minneapolis as part of their Literary Witnesses program and I went to hear him. As I looked at what the exhibit displayed about Bly, I could hear his voice in my head, and appreciated his work as one of the poets who sought to move on from what has been called “old-fashioned verse.” In other words, verse that is less formal, uses plain language, does not rhyme, uses the poet’s individual voice. The definition may sound a bit familiar to those of you who have read our journal; that’s the kind of poetry we publish at Gyroscope Review.

Other parts of the exhibit that I especially enjoyed were the handwritten copies that came from the poets themselves that showed how they worked. My favorite was a page from one of Louis Jenkins’ notebooks that showed the same prose poem written twice, words crossed out in both versions, the endings entirely different. This little look into how poets work made my own messy notebooks feel a little more valuable, a little less like unimportant scribbling. And it reminded me how revision might take the writer far from the original idea.

And, of course, I paid attention to the number of small literary magazines that have come from this area. Robert Bly’s The Fifties (which changed names in subsequent decades: The Sixties, The Seventies). Dacotah Territory. North Coast Review. Since Gyroscope Review spans far more than just Minnesota thanks for our far-flung staff, I wondered if we would ever fit in an exhibit like this; maybe just a little? 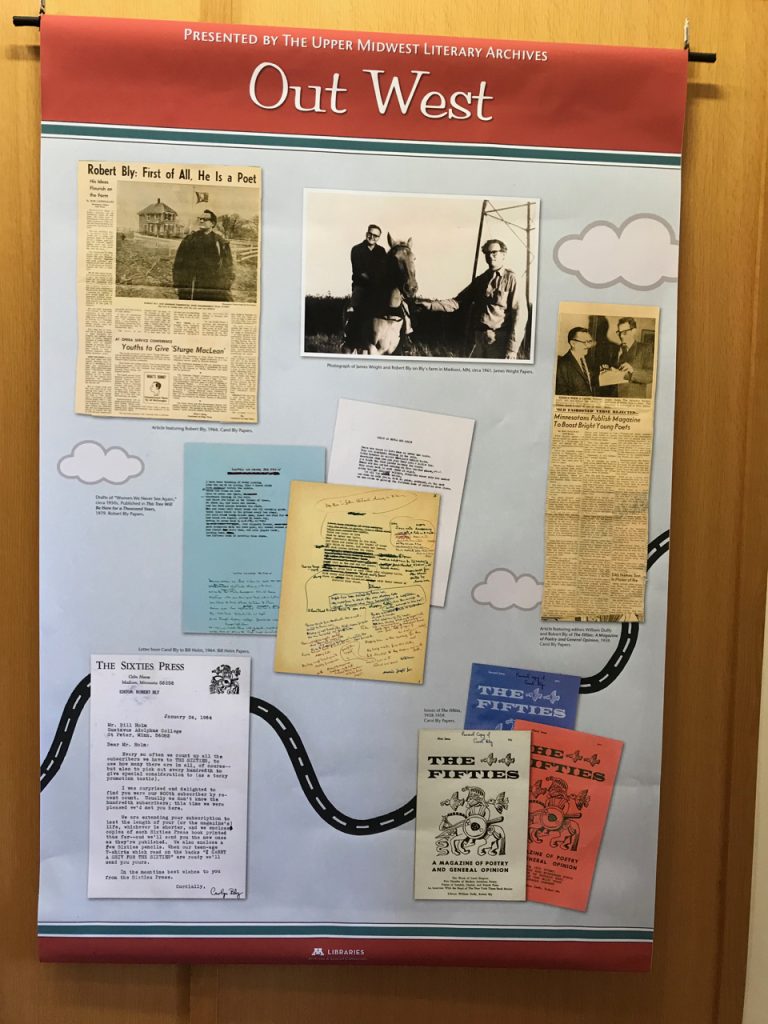 After I had walked through the entire exhibit, feeling lucky to have either heard or worked with several of the poets mentioned, such as Deborah Keenan who taught at Hamline University when I was working on my MFA, I thought about how any landscape has potential to produce a diverse mix of writers. Any place where people feel rooted, inspired, and pay attention is a good place to make art, write poems, tell stories. What is it about Minnesota that created this abundance? What is it about the coasts that do the same?

Whatever it is, I celebrate these Midwest writers who came before me, who inspire so many, who put us on the literary map. If you’re anywhere near Minneapolis this summer, the Prairie Poets & Press exhibit just might give you a little something you didn’t know you needed. And if you can’t make it to Minneapolis, at least get to the prairie, where the vast sky and open land will encourage you to listen to yourself. 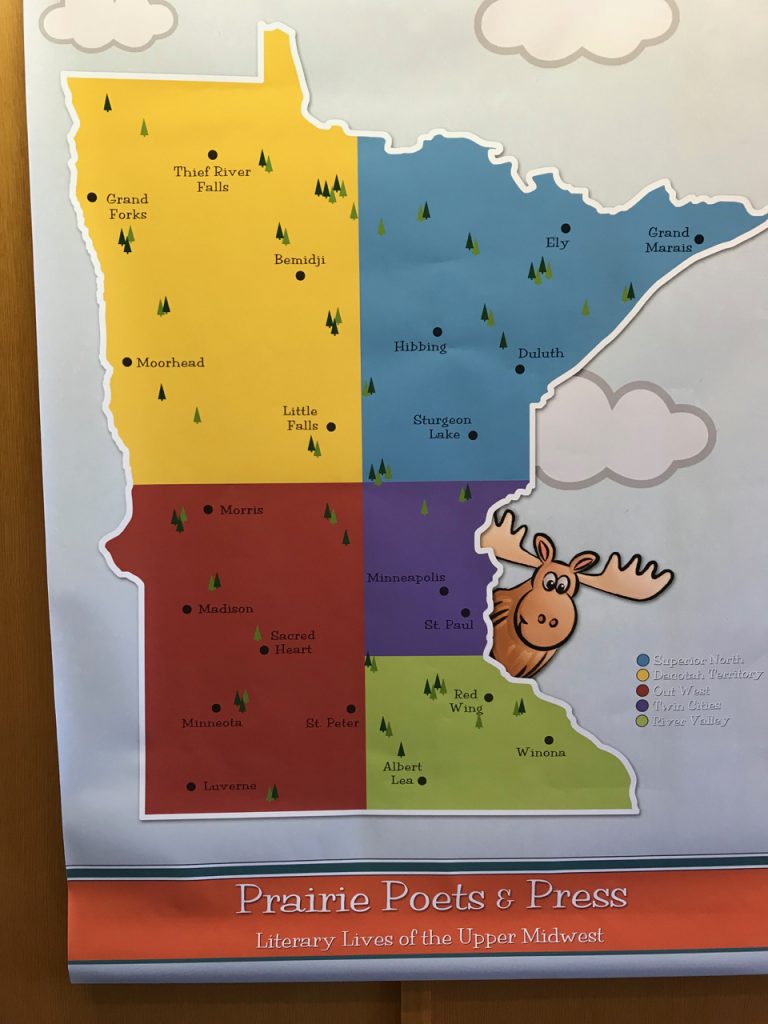