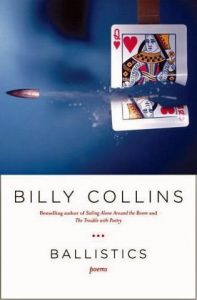 An interesting book of poetry from former poet laureate Billy Collins (2001-2003) is titled “Ballistics”, perhaps as a warning to the reader that a careful analysis is in order. Wikipedia defines ballistics as “the science of mechanics that deals with the motion, behavior, and effects of projectiles”. Collins throws a lot at the reader in terms of history, poetics, and profound ideas disguised under subtle word play, continuing the precedent he set in a previous volume, The Trouble With Poetry. The poems in Ballistics are deeper, more introspective, and in need of repeat readings to grab all the nuances not obvious at a first read through.

The sly humor of previous volumes is still present, just not as ‘in your face’. It’s a testament to Collins’ growth as a poet that he feels free to engage the reader with a more intellectual style of humor, one that counts on background and experience to carry the twists. Collins’ work, is as always, readily accessible -which makes those that believe good poetry should be pretentious – uncomfortable, to say the least. How dare this guy recount experiences that we all can understand and share in? Isn’t good poetry supposed to be as dense as Aunt Mary’s Christmas fruitcake?

An interesting undertone permeates the poems in Ballistics. Although many run over 40 lines, there is a very ‘haiku’ like quality to the work. After carefully setting the scene and leading the reader in one direction, Collins takes pleasure in offering up an ‘aha’ moment that is startling in its clarity.

In ‘Aubade’, the reader wonders along with Collins why he is up at 5:00am, sitting on the edge of the bed. The reason, in the last stanza, is profound in its simplicity, and makes perfect sense in the grand scheme of things.

In the poem ‘Ballistics’, the underlying tone of dark humor is helped along by Collins’ self-deprecating style. When he twists the knife into the hapless hero of the poem, you can’t help but feel a guilty rush of glee.

‘an X in a square on some kitchen calendar of the future’.

In ‘On The Death Of A Next-Door Neighbor’, we get yet another take on Collins’ personification of death. Just like all Collins’ poems where Death is a character, we find out Death is not someone to be feared, but a regular Joe with a job to do. It might not be the type of employment Death wanted, but if he’s going to do a job, he’s going to do it well.

It’s no big secret – I’m a fan of Billy Collins, even more so now that I watch how his poetry evolves. It’s a risk to move beyond what you know people like and will buy, to something that embraces growth, not only for yourself, but for your readers as well. Ballistics is recommended, not just for fans of Billy Collins, but for those who want to carry a poem around in their head for days after and wonder, “Why have I never seen things this way before?”.

This is what we are looking for in submissions to Gyroscope Review. We want to see poems that go beyond the ordinary, that dig deep and serve up an offering that’s different, unique, or just plain out there. Surprise us, delight us, disgust us, but move us somehow. Study Collins, study other poets you admire and see how they deftly handle language, imagery, and imagination. Be subtle, be outrageous, but above all, be you. We want to hear your voice, shouting down a thunderstorm.