The THIRD VOICE: Notes on the Art of Poetic Collaboration
by Eric Greinke
Presa Press, 84 pages, $13.95
Date of Publication: November 1, 2017 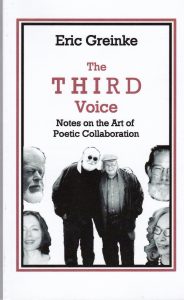 If a poet has lost the joy of wordplay, I suggest that a lively collaboration may be the antidote.

Did you ever sit at the feet of someone, say a grandparent or some other elder in your life, who shared stories of their long life/career/travels, bask in their memories, and perhaps learn from them? That was the feeling I had throughout my reading of Eric Greinke’s new book, The THIRD Voice: Notes on the Art of Poetic Collaboration.

Greinke’s poetic career reaches back to the late 1960s and early 1970s when he was, as he writes, part of  “the local poetry avant-garde in Western Michigan” (p. 11). His poetry output skipped several years when he focused instead on his social work career, then picked up again in the new millenium with the publication of  Selected Poems 1972-2005 (Presa Press, 2005). Collaborative work was, and is, an enormous part of Greinke’s poetry.

In The THIRD Voice, Greinke looks back on his collaborations with poets Harry Smith, John Elsberg, Hugh Fox, Glenna Luschei, and Alison Stone. In language that borrows from both literary theory and the social work/therapy realms, Greinke deconstructs those collaborations so readers understand how they came about, how the work grew out of his relationship with each poet, and what Greinke ultimately learned about poetry and the art of collaboration. He shares pieces that were written in those collaborations as examples of how two different voices may come together in a third, new voice. He also discusses the many ways poetic collaboration can be structured, beginning with dialogic collaboration, which is “a form where poets write whole poems independently but in specific response to each other’s poems” (p. 17). He later segues into collaborations in which poets alternate writing each line, where the process grows organically into invented forms and sequences, and exercises where one poet might write the first, last, and title lines while the other poet writes three lines to fill in the middle of the poem. He discusses haiku and tanka sequences as collaborative projects, and the invention of one-line poems in response to a title. He explores how collaboration may be influenced by gender and age differences, and relishes balancing differences with commonalities.

Greinke’s interest in collaborations was first influenced by the 1967 publication Bean Spasms (Kulchur Press), which was a collaboration between the writers Ted Berrigan and Ron Padgett, with a little help from their friend, illustrator Joe Brainard. As Greinke sees it, Bean Spasms gave permission to have fun with poetry. And perhaps this idea is one of the biggest take-aways of The THIRD Voice. Poetry can be a lot of fun, word play is truly play, and who doesn’t like to have fun playing with others?

Poetic collaboration is more than play, of course. It offers poets so many opportunities for expanding their work and for working through tough topics. Greinke’s collaboration with his friend Hugh Fox offers a beautiful example of collaborating through grief; the two of them spent a year writing poetry together while Fox was dying of cancer. One of the resulting poems, Beyond Our Control, was constructed a line at a time, Fox and Greinke each composing every other line. Greinke considers this his best collaborative work. The poem, a 2015 Pushcart Prize nominee, illustrates how two poets might turn their grief into art and blend their voices into a third voice that good collaboration makes possible.

Overall, this gentle, nostalgic look at the poetic collaborations Eric Greinke has enjoyed over his writing life offers one of the best incentives of all for poets who are considering their options: joy. Collaborate with another poet, let it evolve organically, and reclaim the joy of word play that called to you the day you first fell in love with a poem.